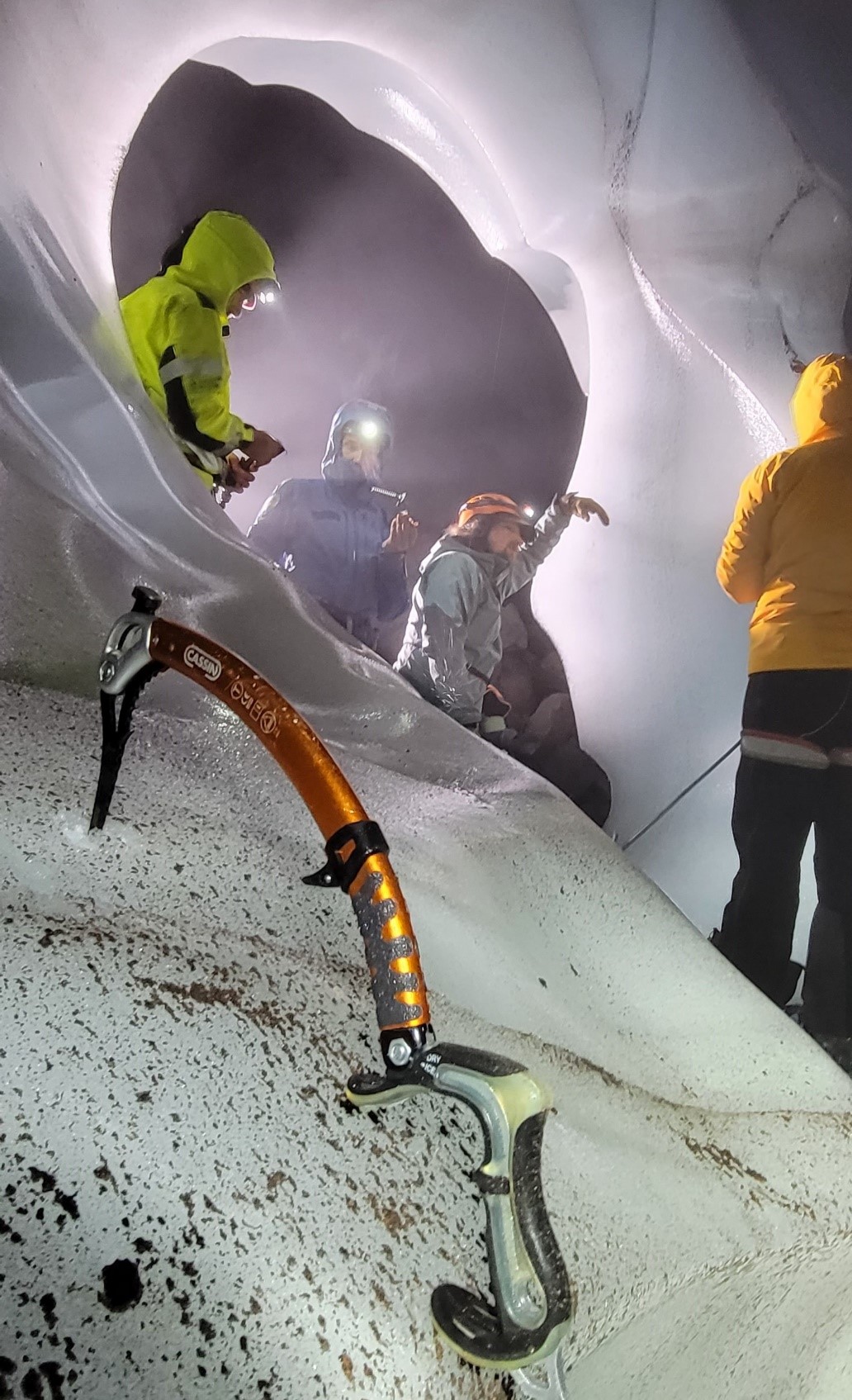 It’s difficult to find a more extreme environment on Earth than inside the crater of Mount St. Helens in the U.S. Pacific Northwest.

Nonstop rockfall. Avalanches. Chaotic and unstable localized weather patterns. More rockfall. Fumaroles belching steam hot enough to melt the soles of your boots. Unpredictable venting of deadly volcanic gases. Crevasses in the glacier fields. Enormous ice caves just below the glacier surface. It can sometimes feel like everything in the crater is trying to kill you.

But for the few hardy souls allowed once a year into the crater of Mount St. Helens to study volcanology, climatology, microbiology, hydrology, vulcanoglaciospeleogenesisology (I think we made that one up but it fits) or just about any other ology you can imagine, the St. Helen’s crater is an enormous, volatile Petri dish. And for the scientists trying to not only figure out how life was first formed on our planet but how and where we should look for life elsewhere in our solar system, the ice caves beneath the glacier in the crater are akin to a giant, otherworldly laboratory. Which is pretty ironic, considering that more people have been on the moon than have stood in the newly discovered ice caverns below the glaciers in the crater of Mount St. Helens.

But what does all this have to do with a company that makes litters, toboggans, and backcountry safety equipment? Quite a lot, as it turns out. Because the scientists visiting Mount St. Helens need to focus on science, they must rely on a well-equipped and savvy safety and rescue team to support them every step of the way.

That’s where we come in. 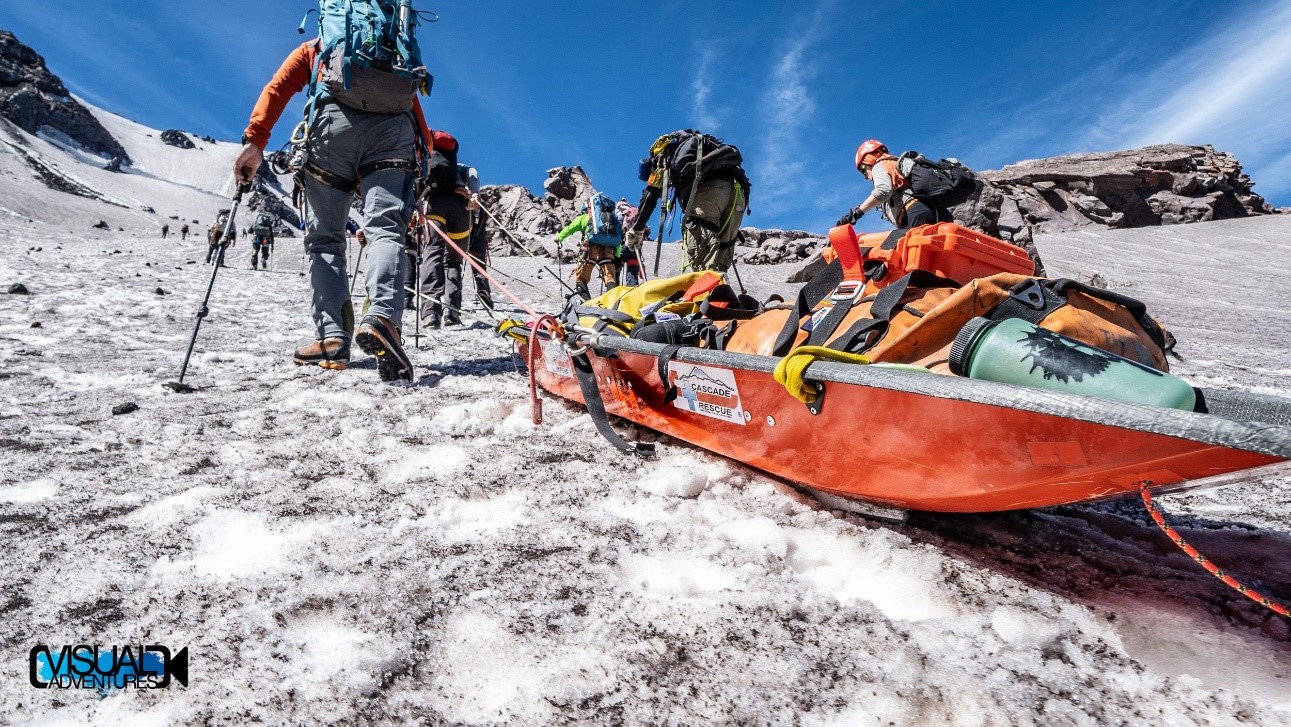 This year’s expedition was the largest to date, with 24 souls spending a week in the crater. And as he’s done since 2014, Eddy Cartaya was the Cat Herder in Chief of the expedition. A veteran National Cave Rescue Commission Cave Rescue Instructor and co-founding member of the nonprofit group known as the Glacier Cave Explorers, Eddy and his wife Barb put together fact finding scientific expeditions into the glacier caves of St. Helens, Mount Rainier, Mount Hood and also work in support of Canada’s Mount Meager project. This year’s crew included rescuers from the Volcano Mountain Rescue Team, Portland Mountain Rescue, the Alberta/BC Cave Rescue Service, Deschutes County Search and Rescue, Corvallis Mountain Rescue, Linville Central Rescue Squad in North Carolina and my own Alpine Rescue Team. 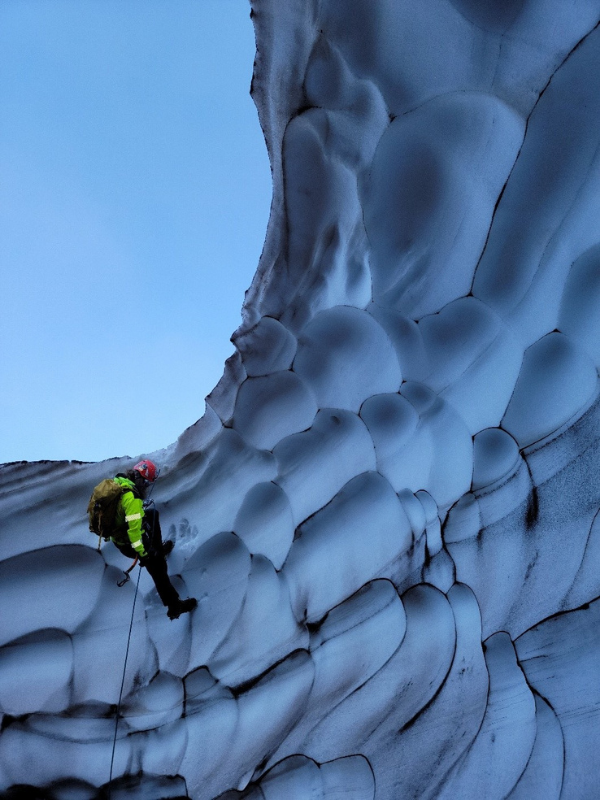 I had the privilege of acting as the expedition Safety Officer alongside some of the best mountain and cave rescuers you could ever ask for. We even brought our own doctor, the incomparable Dr. Woody Peebles, and my old pal Jason Nelson with Visual Adventures was in charge of documenting our efforts for the PBS documentary show “Terra” (look for it to air in October).

In Search of Godzilla

When Mount St. Helens erupted in 1980, it blew away the top 1,300 feet of the mountain and left a 2,100’ deep, 2-mile-wide crater. Shortly after that cataclysmic event, a donut-shaped glacier formed in the shade of the crater rim around the two lava domes that were created from spewing lava as it cooled. It’s the only growing glacier in North America, with roughly three kilometers of mapped and surveyed ice caves. These types of ice caves are incredibly rare because they are formed not by running water, but steam and the hot vented vapors from deep inside the earth.

When the first glacier cave was spotted from the crater rim above back around 2014, the massive size of its entrance earned it the name Godzilla Hole. Ever since then, almost all the other caves have been given Godzilla themed names. Mothra, Hedora and Ghidora have all been discovered, surveyed and mapped since 2014. Rodan, the biggest monster cave in the crater, is now the second longest and second deepest fumarole ice cave in the world. Canadians Christian Stenner and Katie Graham have spearheaded most of the surveying efforts, and the minutely detailed cave maps they generated help the scientists figure out where to do their research and allows them to track the changing locations of their data loggers from year to year. These maps are like the canvas that the science is painted upon, as Christian and Eddy are fond of saying. 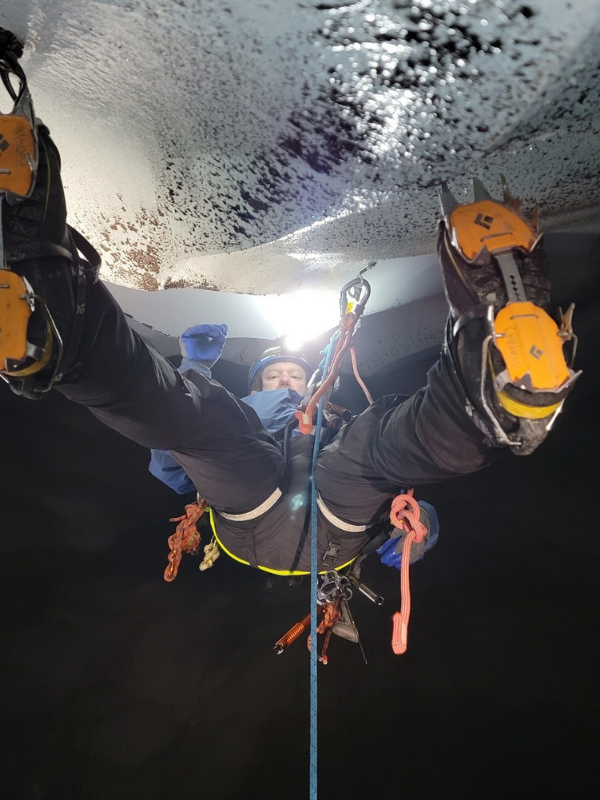 Typically, when we want to explain how slowly something moves, we often refer to its pace as being glacial. The glaciers inside St. Helens may be a lot of things, but slow moving they are not. In one 10-month period this year, a data logger was carried more than 10 meters. Last month, we recorded the glacier moving 1.75 centimeters in less than 24 hours.

Sadly, the original Godzilla Hole has since been swallowed by the rapidly moving glacier. But as we discover in all Godzilla movies, there will likely be a sequel.

Or at the very least, it sure makes things a lot easier for all of us who were tasked with keeping our scientists and cave surveyors safe while they scrambled to, and through, the three kilometers of caves we’ve discovered.

In the past, we’d relied on an old military sled to carry our supplies from our Base Camp. It’s a mile and a half slog up the rock-strewn glacier, with a gain of more than 1,000 feet in elevation. But in addition to carrying the hundreds of pounds of gear, we needed a litter that could also be used to evacuate a member of the expedition if they got sick or became injured. The Cascade Rescue Model 350 was a welcome improvement on the old litter. It could be broken down into two pieces for the helicopter sling loads, and its carbon fiber/titanium construction helped it to stand up to the uber-abrasive pumice and ash that covered almost every square inch of rock and snow in the crater. 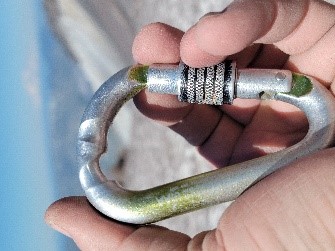 On the steepest slope, we used three dead men anchors (buried pickets in a load-sharing T-slot formation) to set up a raise/lower station. Using a simple counterweight system with a Petzl Microtraction as the progress capture for the 500’ of PMI 8mm DuraShield rope, we were able to help the haul team climb the glacier without gassing out everyone each morning. As we made our way back down the glacier at the end of each day, we’d use a simple Italian Hitch to lower the litter and one attendant. The pumice and volcanic ash embedded in the snow basically turned our ropes into sandpaper when it got impregnated in the sheath, and we nearly sawed through our carabiner in just a few lowers.

To stay sharp, we practiced Small Party Assisted Rescue (SPAR) techniques with minimal lightweight, technical gear. As always, our air monitors and emergency rebreathers, were at the ready. Since rescue from the outside could potentially be hours (or days depending on the weather) away, we needed to be self-reliant and ready for the worst at any given moment.

Until We Meet Again 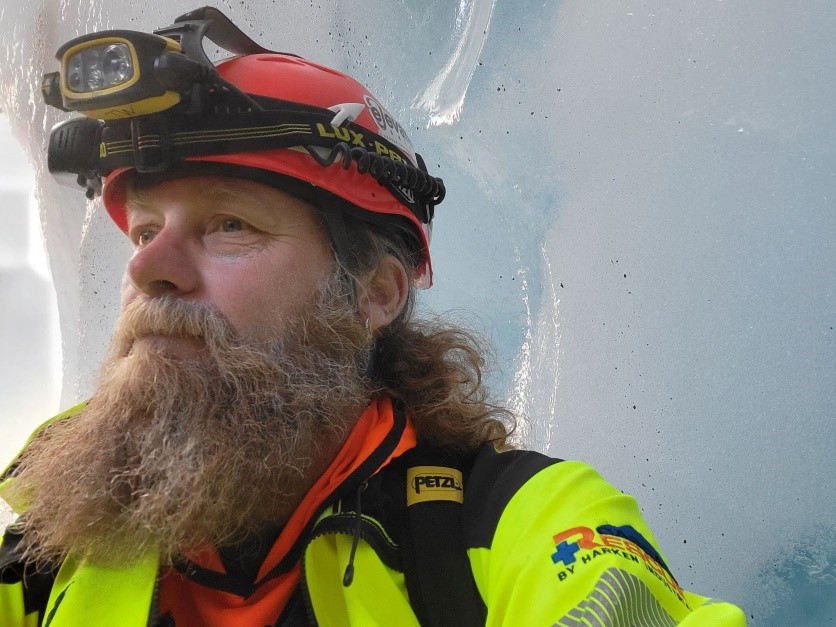 This year’s expedition was the most successful yet, with the scientists meeting and exceeding all their research goals. Most importantly, the team had no major injuries or accidents (other than the shredding of a couple of our expedition tents during a freak late night wind storm).

Cascade Rescue would like to thank everyone for their efforts this year. Also, kudos to the management and staff of the Mount St. Helens National Monument, the National Cave Rescue Commission, the Mountain Rescue Association and JPL Aviation for being so supportive.

And lastly, a big shout out to EVERYONE who trusts their lives to our gear, we genuinely appreciate your continued support of Cascade Rescue throughout the years. 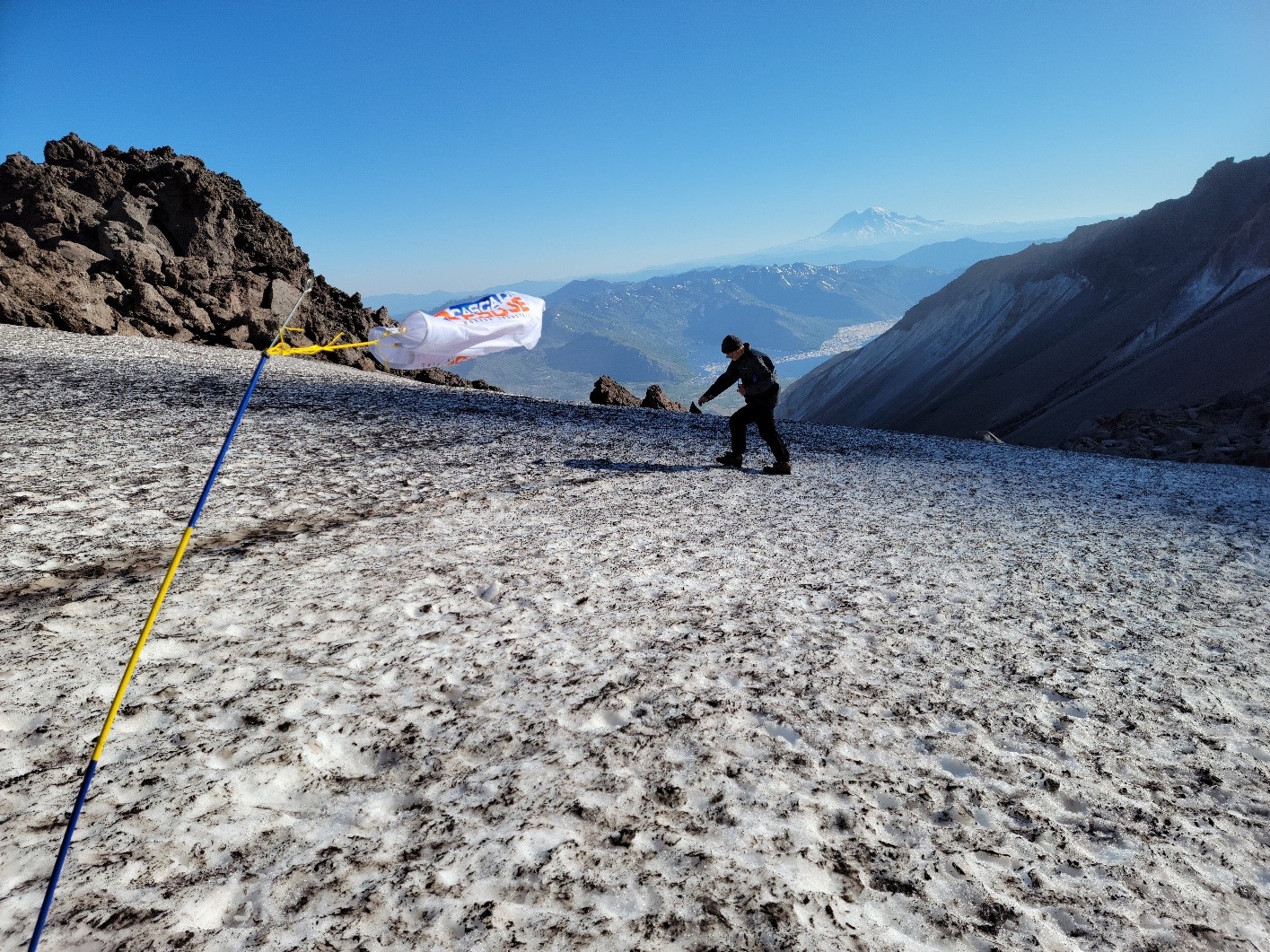